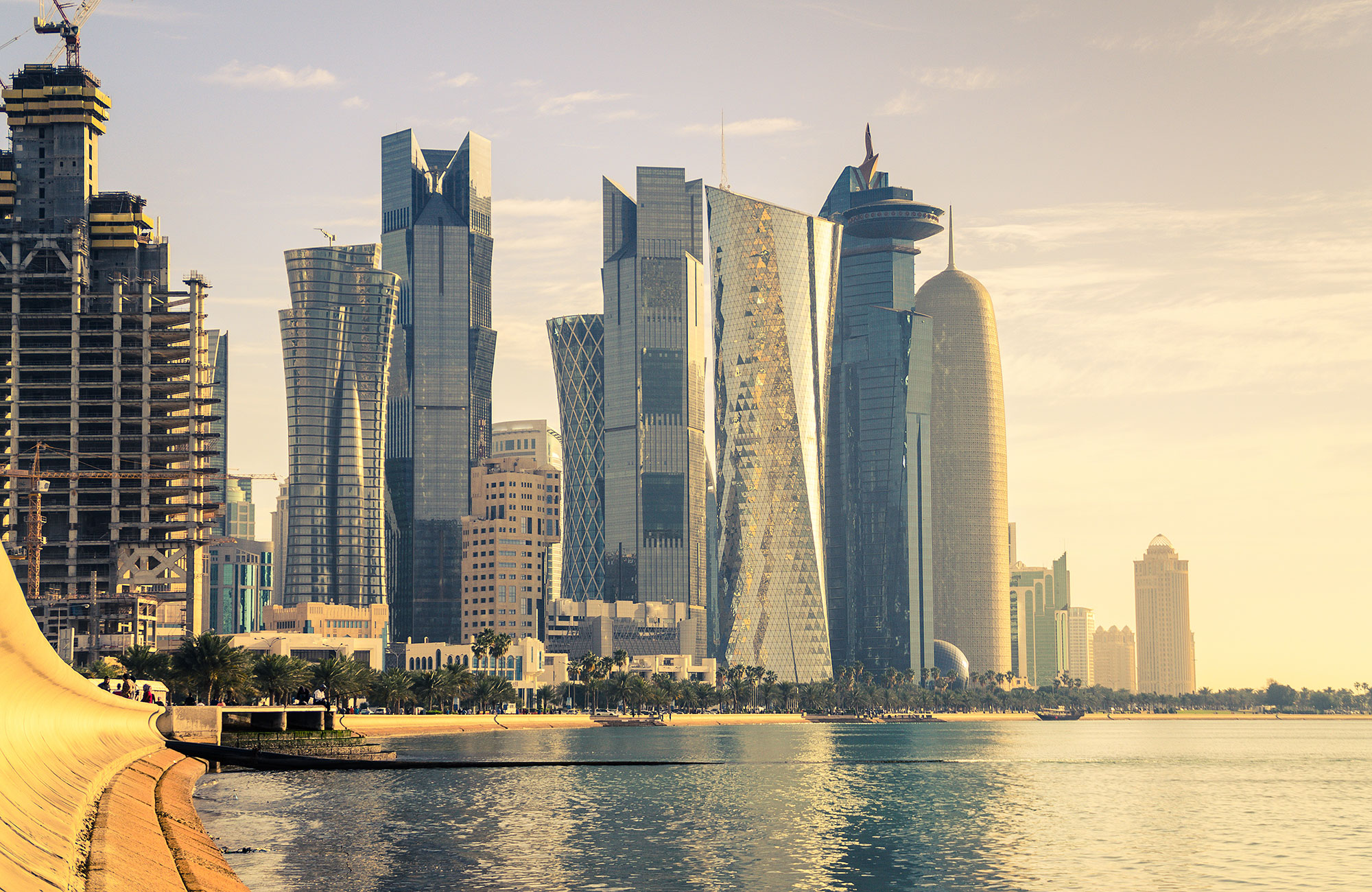 On a trip to Qatar you experience how wealth and modern development is rapidly changing a traditional Arab country into a futuristic Disneyland, with expensive hotels and shopping malls. At the same time you can experience the deserts, oases and some quite unusual natural phenomena in this Middle Eastern country.

It is not the Middle East mysticism and 1001 Nights taking place in Qatar. This country has other things to offer. Since the oil story took off in the late 19th century, Qatar, in record time became one of the world's richest countries. The rich sheikhs spent millions to transform the old Arab country into a modern city with futuristic buildings in the best 'Jetsons-style', so it's not the travel agents classic interpretation of the 'authentic Arabia', which characterizes the mood of Qatar.

Qatar – the premier league of the Middle East

Every year, Qatar is visited by nearly as many tourists as there are inhabitants in the country, and the travel industry in Qatar has suddenly realized that there is money in rebuilding the 'true Arab spirit', which matches the stereotypical images of an Arab country with hectic souqs, glittering mosques and mud houses. Therefore you’ll see plenty of new hotels and resorts where you live in beduin tents, eat on blankets in the dark caves and get scrubbed on your back in a steamy hammam. Some would say that Qatar is in danger of ending up as an Arab Disneyland.

Before you pack your bags and travel to Qatar, remember that people here are Wahhabi Muslims like in Saudi Arabia. That means they do not drink, and that men and women dress in traditional white-sheik outfits and black scarves. As a tourist in the country, you must cover up as well. Men may not wear shorts and women must cover shoulders and knees. Otherwise, Qatar is a free Muslim society, and since 1995 there have been freedom of press in the country. This is also where the television channel Al-Jazeera was found.

Avoid travelling to Qatar in the Summer, average temperature is 35 degrees and humidity rises to 90%. As if this was not enough, they also have frequent summer sandstorms.

Modern Doha is not only built on wealth but also great vision and belief that living standards can be maintained - even when the oil runs out. Soaring house and cranes shoot toward the sky and new skyscrapers with mirror smooth glass facades are being built even higher.

Only 20% of Qatar's residents are Arabs. The rest is imported male workers, and therefore you won’t meet many women in Qatar. Because of the many guest workers it can sometimes feel as if none of the Doha residents really takes root, but that everyone is just in transit.

Doha is known for its 7 km-long Al-Corniche waterfront that embraces the Doha horseshoe-shaped bay with palm trees, luxury hotels and expensive apartments. Maybe the Middle East's most expensive, Qatar is a terribly expensive country, with prices above 100 dollars per night. You might be able to save some money by eating on cheap local joints and 'couch-surf' with Qatar's expats.

The original Arab mood takes you into the labyrinthine Souq Waqif. Although this souq has recently been renovated in honor of tourists, the atmosphere is maintained, and here the traditional hectic trading takes place in full force. This is where you can buy traditional costumes, spices and exotic gifts to take home. Most old souqs have been taken over by giant shopping centers, where the rich women of Doha show off their latest Louis Vuitton bag.

What Doha lacks in terms of typical Arab sentiment, you’ll find in the little oasis of Bir Zekreet. This oasis is a small sand-colored city and looks like something from a Donald Duck magazine. Here are not many tourists, because it requires 4WD to get to the oasis, and you must bring your own tent and the necessary food and water. But a stay here will also give you the starlit desert nights all to yourself. Very romantic.

The most beautiful experience of nature in Qatar is undoubtedly Khor Al-Adaids migrating sand banks, which creates the most beautiful undulating formations in the sand. This desert winds it’s way down to a lake, connected to the Arabian Gulf 10 kilometers away. Wildlife is extraordinary with turtles and manatees, and the place is also designated as a UNESCO World Heritage Site.

If you are historically and culturally interested, the port city of Al-Khor just north of Doha is worth visiting. The city was once the heart of Qatar's large pearl industry which collapsed in 1930 and sent Qatar into great poverty. Today, Al-Khor is a cozy place to spend a few days to look at traditional houses in the old town and the birds in Al-Khor Gardens. In the evening you can enjoy the view and the local cuisine at one of the restaurants along Al Khor Riviera.

Want to know more about the best way to explore Qatar?

Whether you're planning a specific trip here or you're dreaming of a longer trip with Qatar as one of the stops on your itinerary, we can give you some helpful tips.