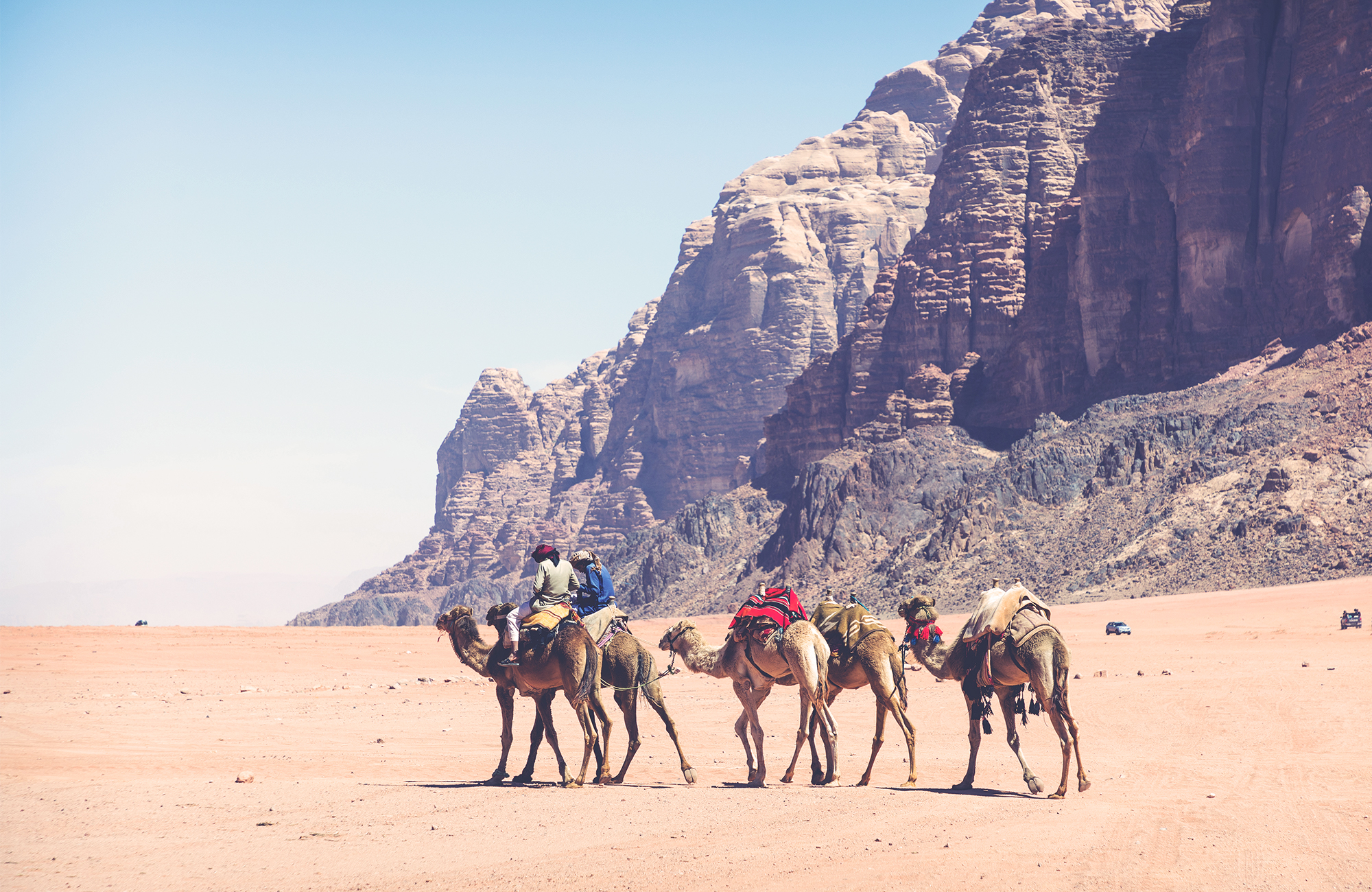 Travel to Jordan - Adventures in the desert

After your arrival in Jordan, it is only a matter of seconds before you hear the words, “Welcome to Jordan!” Jordanians really appreciate tourists and their hospitality shows! Young and old, rich and poor, military and police, everybody will greet you with a big smile. Though the country is small, the highlights are big! Visit the incredible Petra, swim in the Dead Sea, or take a camelback safari in Wadi Rum. Jordan will put a smile on your face.

Jordan's capital, Amman, is also its largest city. It sits atop seven hills, which are represented by the seven-prong star depicted on the Jordanian flag. Amman has spacious suburbs, modern shopping districts, a buzzing old city, the Citadel, and the Roman amphitheatre. After making your way through these various sections, head down to the lively souks, or outdoor markets. Be prepared to accept chai tea from shopkeepers as a simple hospitality gesture and a part of the bargaining process. On the whole, Amman is a very nice city to be in.

For a superb day trip outside of Amman, drive an hour north to reach the ancient Roman ruins of Jerash. You can hire a taxi to take you roundtrip – it won’t break the bank. It will even wait for you while you are there, so take your time to enjoy the spectacular sight. At Jerash, you can see a roman amphitheatre, the Temple of Artemis, the Arch of Hadrian, and the Oval Forum. Jerash is now the second-most popular tourist attraction in Jordan, closely behind the splendid ruins of Petra.

If you find yourself in Jordan on a clear and hot day, a trip to the Dead Sea is a must! Along the shore, you will tons of public beaches and spa resorts. One of the most popular beaches for tourists and Jordanians alike is Amman Beach. For a small entrance fee, you can enjoy a nice a pool area and the beach. Facilities of all kinds are also available, such showers, toilets, restaurants and souvenirs. Taking a dip in the Dead Sea itself is a hilarious experience. By the time your feet no longer reach the bottom, you will simply just “pop-up” and float with absolutely no effort. while swimming is just not possible, the feeling of freely floating is great. Just grab a beer, sit down in the water, and chill out.

Petra is easily Jordan's most recognizable attraction. In 2007 it was announced as one of the New Seven Wonders of the World, a millennium project that selected seven world wonders out of 200 existing monuments. These ruins are unbelievably magnificent and can only be truly appreciated when seen in person. Interestingly enough, the site remained unknown to the Western World until 1812, the Swiss explorer Johann Ludwig Burckhardt made it known.

Experience some awesome desert scenery, beautiful mountain formations, and inspiring landscape in Wadi Rum. In order to get around, you can go for a camelback safari or a four-wheel drive. Be sure to also spend the night in a desert Bedouin camp where you can lay under the stars and enjoy a new lifestyle.

As Jordan's only port, Aqaba has many fine beach resorts with diving and snorkelling available. It is located about 3-4 hours from Amman by car, and definitely worth a visit!

Where is the country Jordan?

The Hashemite Kingdom of Jordan, a small Arab country in the Middle-East, spans the southern part of the Syrian Desert down to the Gulf of Aqaba. Jordan shares borders with Syria to the north, Iraq to the north-east, Israel to the west, and Saudi-Arabia to the east and south.

Want to know more about the best way to see Jordan?

Whether you're planning a specific trip here or you're dreaming of a longer trip with Jordan as one of the stops on your itinerary, we can give you some helpful tips.