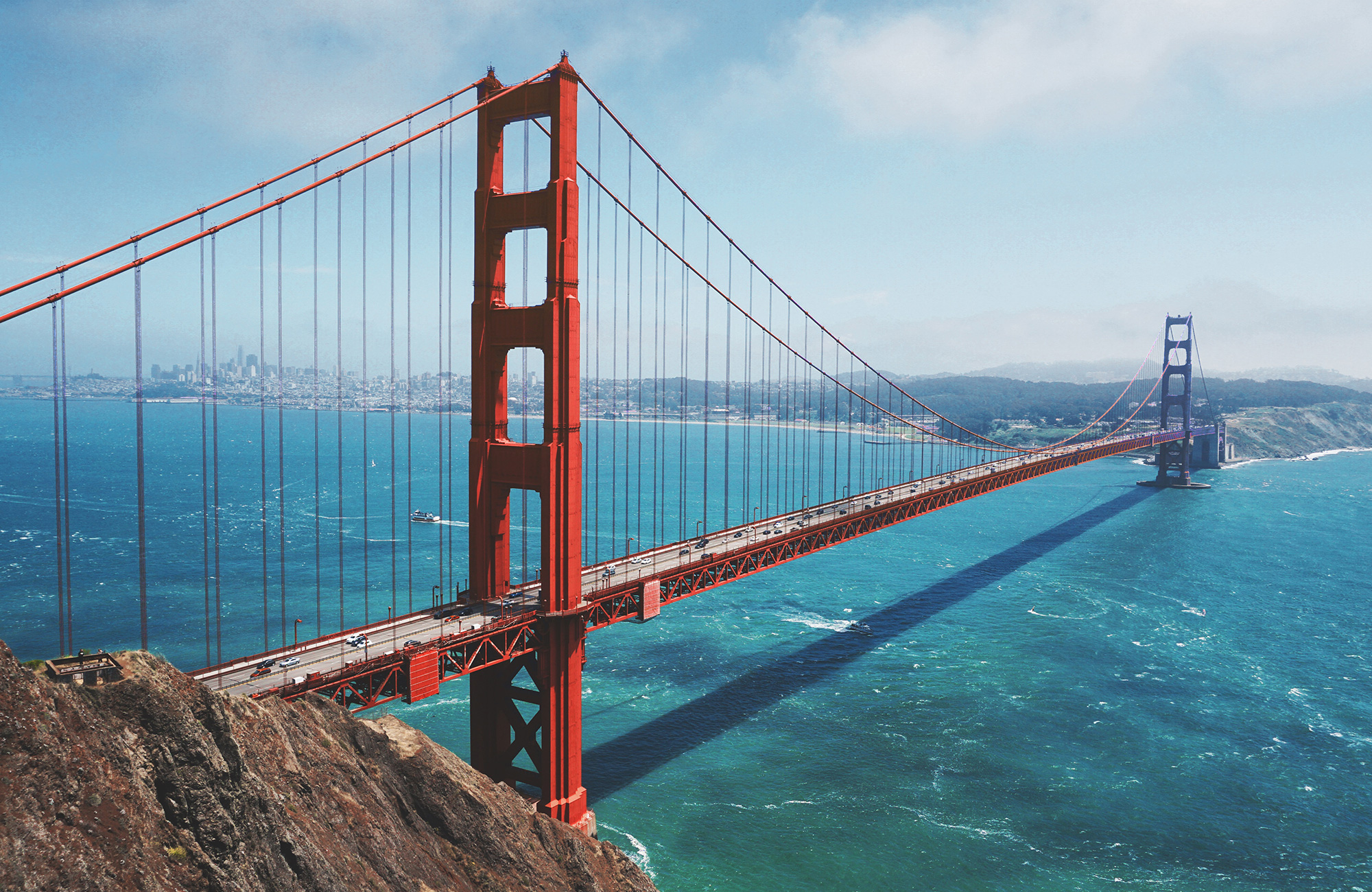 The colorful San Francisco is a brilliant and fascinating city of open-minded people, scary steep hills, green parks, stunning views, rich cultural life and one of the most famous and impressive bridges on Earth: the Golden Gate Bridge.

San Francisco is located in California in the San Francisco peninsula. On the west side you have the wild and open Pacific Ocean, on the east you have the slightly more sedate San Francisco bay. San Francisco is really an innovative and somehow fresh city with a pleasant climate, a cool sea breeze and open-minded people. The city is though most famous for its steep, charming streets. As you roll around with the little cable cars, you'll see amazing sceneries and lots of colorful charming houses standing side by side. This city even has cable car drivers bell ringing championship! There are many parks in the city. Lafayette Park and Buena Vista Park are great places to have a picnic during your city day. Check out the Presidio and Lincoln Park as you continue your exploration.

There is never an end to San Francisco

There is never any end to Paris, says a famous novel by Ernest Hemingway. The same applies if you travel to San Francisco because there are only few cities offering as many sights and interesting city areas. First and foremost is the beautiful Golden Gate Bridge, the symbol of San Francisco, built in 1937. It was the world's longest suspension span bridge until 1964. Take a walk or a enjoy jogging along it in nice sea views. The Golden Gate green park is very nice area to hang out for a while.

Most traveling books recommend the Fisherman's Wharf as a nice sightseeing place but this is a really busy tourist attraction and the wonderland of cheesy souvenir shops. If you decide to go there, on your way to Alcatraz Island, visit Pier 39, the home to the Sea Lions.

The historical Alcatraz is a tiny island not far from the mainland. It used to be a very notorious federal prison back in the days until 1963 when it became a park for all the citizens. Today it is as equally famous as it used to be and now it serves as a museum, lighthouse and recreational area. You can get there by ferry from Pier 33. Be prepared to wait your ticket & place to the ferry, they can be fully booked during the high season.

Attention all the hippie minded! Haight Asbury district is where you should go as here the summer of love 1968 was born. This center of these loving currents is still a very entertaining and colorful place in San Francisco. You'll see lots of hippie stores selling vintage clothing and Jimmy Hendrix drawings. Here you definitely find a really laid back atmosphere!

Chinatown has always been a famous San Francisco icon. It is indeed on of the oldest, and largest, of its kind in USA. It was established in 1850. You must go there if you are an Asian food lover. If you travel to San Francisco in late January you shouldn't miss the amazing Chinese New Year dragon parades, moving along the Grant Avenue.

The Financial District is a business district of the city with all the corporate headquarters. Even thought it has a bit of the Manhattan feeling, the buildings are lower because the citizens didn't want to huge skyscrapers here. It is also here you find lots of good and classy shops, especially at Union Square. Other shopping playgrounds are big malls like Crocker Galleria and Embarcadero center, just to name some.

Castro is the gay and lesbian side of the city. Back in the 1920 it was known as the "Little Scandinavia", because of many Swedish, Finnish and Norwegian people living there. During the "Summer of love", it became the real gay district. Castro is definitely the place to experience the flamboyant and cheerful Gay Freedom Day Parade held in June!

Surfing in the city's Ocean Beach's waves is said to be one of the most demanding surfs in the whole California, because of freezing water and huge waves. This is the same reason why you won't see many swimmers. You'll need a wetsuit and lots of experience to try these waves.

Hop on a sailboat and do some cruising. You can rent rollerblades or a bike, which are good ways for checking out the surroundings.

When it comes to cultural life, music and dining, you'll have difficulty choosing because the city is simply booming of interesting stuff. There's superb variety of restaurants, theatres, clubs, bars, art galleries - you name it. Most bars and clubs are located in the Mission, Soma and Chinatown.

Have a cocktail in the Aub Zam Zam (1633 Haight St, The Haight) and enjoy its cool jazzy sounds as you soak in the Arabic charm or head to the well known Biscuits&Blues (401 Mason St, Theater District) where the best jazz&blues are performed. One of the most famous clubs is definitely 1015 Folsom in Soma with funky DJs. The Mock Café (1074 Valencia St, The Mission) is great for those who want to laugh offering cool stand up comedy. The city is famous for his many good festivals and street parades, so you need not be bored.

The surrounding cities like Oakland, Berkley and San Jose are not that far away. The Wine Country and amazing Yosemite National Park are worth experiencing too, so renting a car is recommended. Good idea is to drive the whole Highway 1 route that runs along the Pacific coast of California. You can start from LA and make your way to San Francisco Golden Gate Park - or the other way around. Expect fantastic sceneries along the way! This will take some time; a week is a minimum, so plan your trip accordingly.

Did you know that KILROY can also help organise your study tour to San Francisco? We can plan your study trip with the right academic content and interesting study visits in the city of your choice.

Want to know more about the best way to see San Francisco?

Whether you're planning a specific trip here or you're dreaming of a longer trip with San Francisco as one of the stops on your itinerary, we can give you some helpful tips.