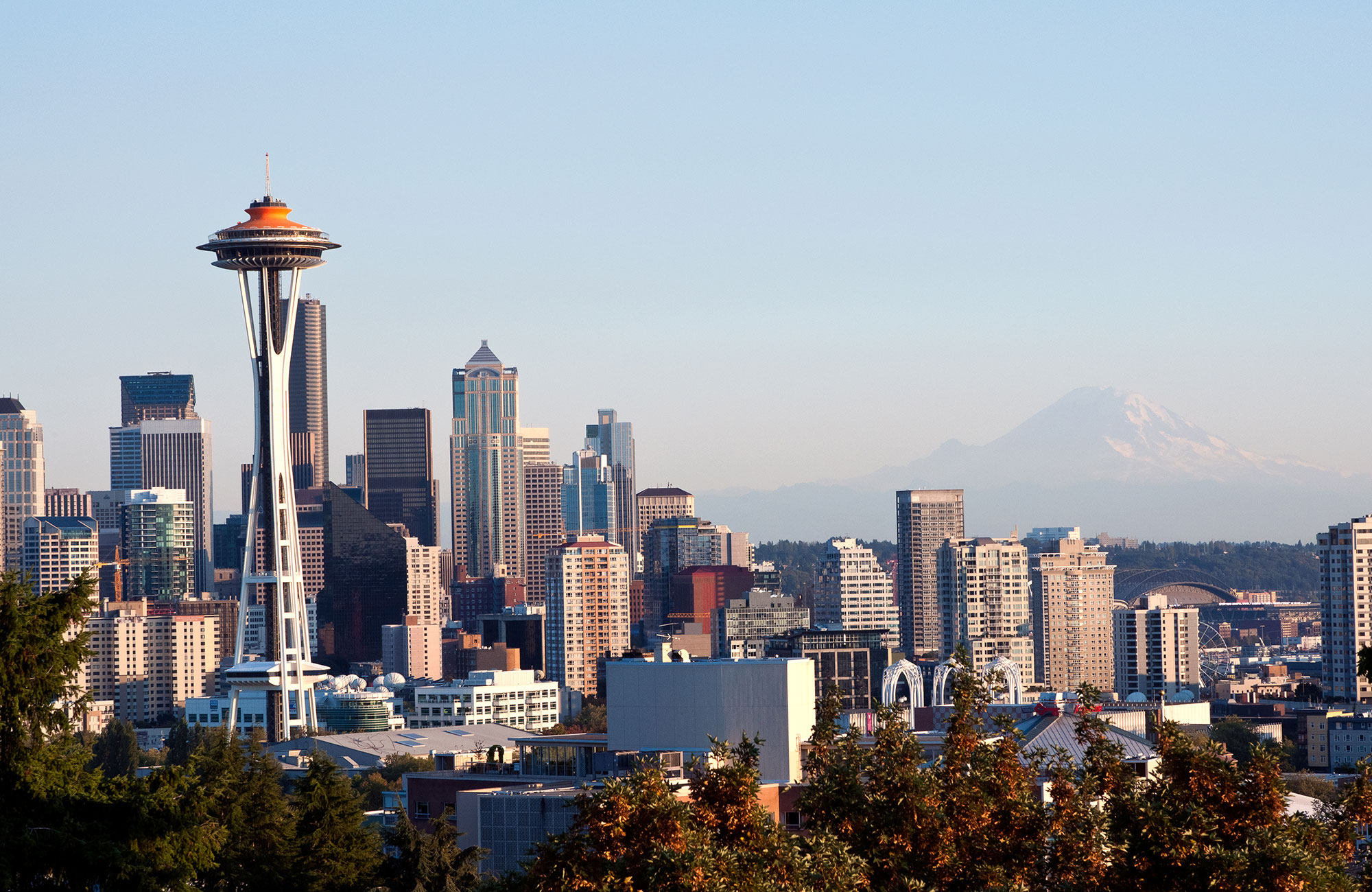 As the birthplace of Starbucks Coffee and the home of Bill Gates’ Microsoft headquarters, Seattle is a dynamic and exciting city to visit while traveling through the USA. The city attracts significant tourism, mainly due to its perfect location between the ocean and the mountains. Seattle therefore offers the perfect blend of stunning nature and bustling city life. From Seattle, one can easily reach the Canadian border or the volcano Mount Rainier. In general, Seattle is a great destination in the lovely Pacific Northwest.

Seattle is a unique American city, unlike any other on the great continent. You can feel the “European” atmosphere when you walk the streets, despite the many skyscrapers and other well-known American landmarks. Seattle also has a lot of Scandinavian descendents, especially in the areas outside downtown. In fact, the city is so popular among Scandinavians that an SAS flight arrives there directly from Copenhagen every day.

This is one of Seattle's nicknames, as the city gets a lot of rain and cloudy days. However, it’s a mild place and the temperature in the city has not dropped below freezing since the 1950’s. Snow is also a rare phenomenon, even though the mountains are very close. Summers are in general nice and warm, although you don’t get many heat waves due to the proximity of the Pacific Ocean.

The attractions of Seattle are very popular. If you are into museums, magnificent nature, and cozy city life, then you have it all right there. The Space Needle, Seattle Center, Pike Place, Market, and the Boeing Factories are just examples of exciting things to explore during a visit in Seattle.

Public transportation is okay and it’s fun to ride the downtown monorail to the Space Needle. However, if you really need to get around the greater Seattle area, you should rent a car. Like any other American city, Seattle and its vicinity are best seen from the steering wheel of a gallon-hungry vehicle. If you do rent a car, make sure to visit Vancouver in Canada or the Olympic National Park just west of Seattle. You’ll need a couple of days to take in the beauty of this heavily-forested park. If you like trekking, you will be especially happy there.

Wildlife is also popular and easily accessible in this part of North America. Take a day-cruise on the Strait of Juan de Fuca and check out the impressive killer whales (Orcas) which pass through these waters. You might recall scenes from the movie "Free Willy" while you are there!

In the northwest of Seattle, you can find the starting place of highway 1, which takes you all the way south to San Diego. Apart from various cross-country routes, this coastal drive is incredibly scenic and probably the most popular one within the United States. It passes through the huge Redwood trees in Oregon as well as the cities of San Francisco and Los Angeles before reaching the Mexican border in southern California.

No doubt that Seattle is worth a visit and a perfect place to start an American journey!

Want to know more about the best way to see Seattle?

Whether you're planning a specific trip here or you're dreaming of a longer trip with Seattle as one of the stops on your itinerary, we can give you some helpful tips.