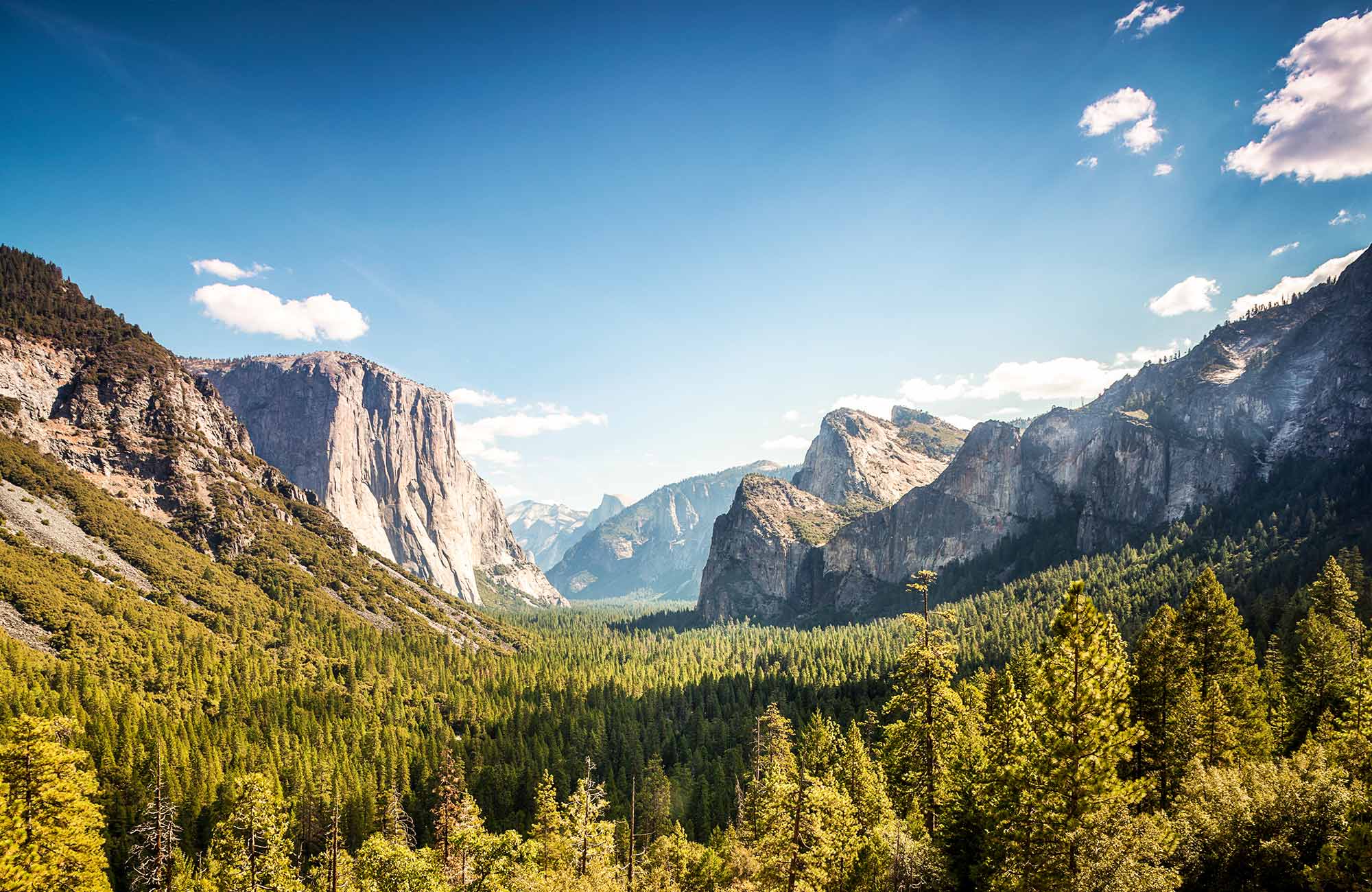 Yosemite National Park is a green and very lush park, which has some of North America's tallest waterfalls, where melting water from the Sierra Nevada Mountains dump into freefall. Some places it is possible to be so close that you can feel the mist and water on your skin, while waterfalls rumble off toward the bottom of the valley. Among the main attractions are the Upper Yosemite Falls, which has three single drops of 740 meters in total.

Yosemite National Park was founded in 1890 and extends over approximately 3000 km2. The National Park is among other things famous for its beautiful rocks. Not least the ones found in Yosemite Valley, bounded by Half Dome and El Capitan and other nearly vertical granite walls that reach up to 1000 meters. These spectacular cliffs are definitely some of the biggest attractions on the trip to Yosemite and this part of the western United States in general.

If you feel like seeing everything from above, you can take a trip up to Glacier Point from where you have a fantastic view over the valley, Half Dome and Yosemite Falls. Or you can drive through the park and the Sierra Nevada Mountains on the Tioga Road, which has previously been used by both Indians and gold diggers. Yes, it almost feels like history is coming back to life in this part of Yosemite. This stretch is equipped with viewing points, so it is possible to make a stop and stretch your legs while looking out over the valley. But be aware that the road could be closed during winter and quite busy during peak season (June to Septemer).

There are a whole lot of possibilities for exciting tours and daytrips in Yosemite National Park. The park features trails and routes, both for those who want to hike the valley floor, and those who want to trek for days in the backcountry.

Can you guess where it got the name from? Mirror Lake is the name of one of the most famous lakes in Yosemite National Park. This serene lake is the place to enjoy nature in all its glory or work on your photography skills.

Do not miss Yosemite's famous giant trees. It is a sort of the famous redwood trees, which grows in Northern California, and some of the trees in the park are several thousand years old. Please note: Mariposa Grove of Giant Sequoias is closed for visitors until spring 2018 due to maintenance!

5 best places in Yosemite National park for the perfect picture

If you are in California, Nevada, Arizona or Utah, Yosemite is undoubtedly an ideal travel destination. Get something from both worlds by combining the metropolitan pulse of San Fransisco with hiking in Yosemite's breathtaking scenery. A good alternative would then be to visit Yosemite as a part of a epic road trip through Northern California.

Pro tip: Entrance to the park is free on special days throughout the year - check the website for full details. You can also buy an annual pass which gives you access to ALL National Parks and Federal Recreational Lands throughout USA.

Want to know more about the best way to see Yosemite National Park?

Whether you're planning a specific trip here or you're dreaming of a longer trip with Yosemite National Park as one of the stops on your itinerary, we can give you some helpful tips.