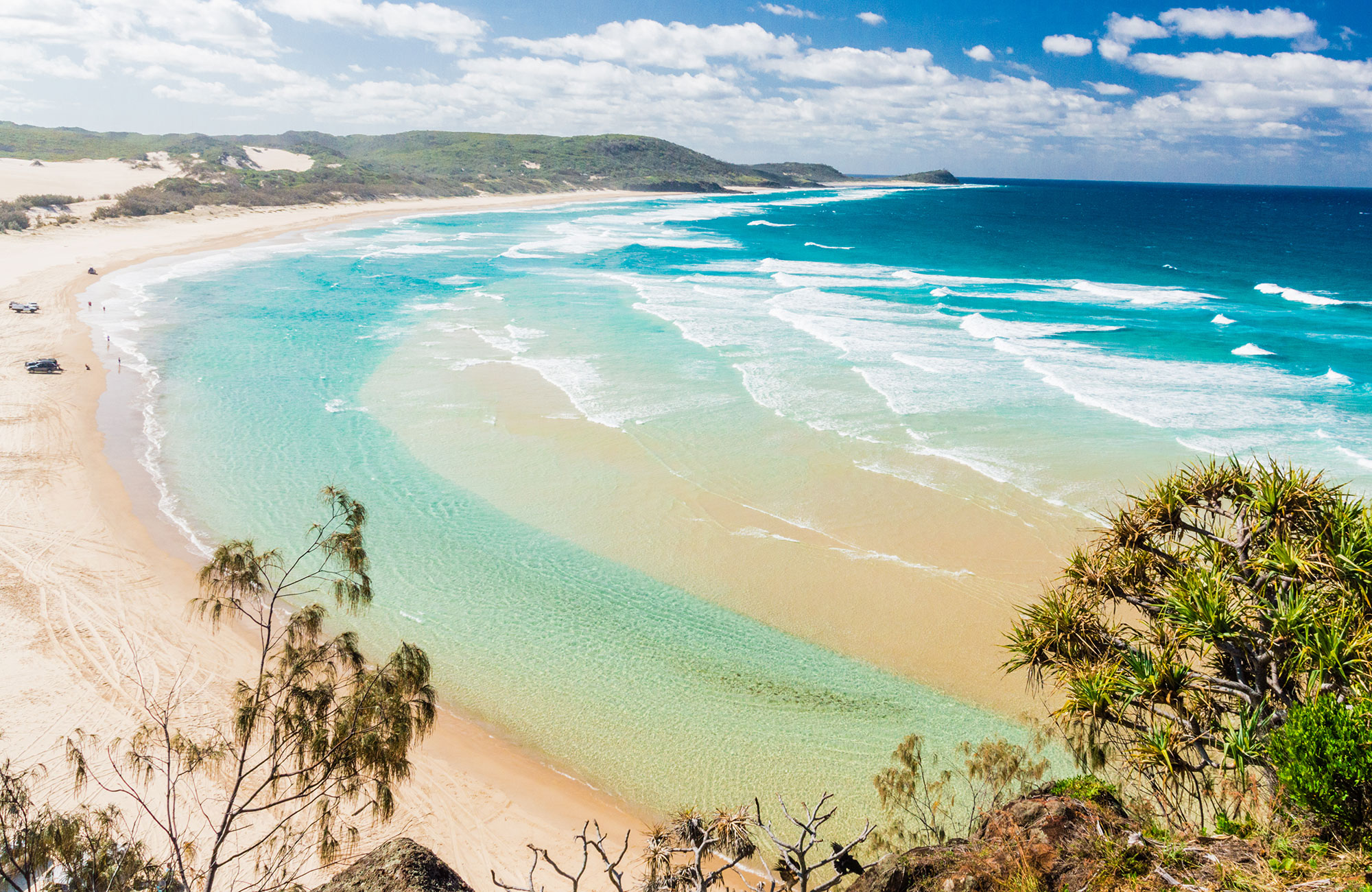 Frasier Island is the destination for adventurous backpackers! Get lost in the middle of the world’s largest dune island and swim in beautiful freshwater lakes. No need to worry about sharks or jellyfish here! The only highway that you'll find here is the coastline, but you can still have a blast driving through the sand on a 4-wheel drive.

Adventures in the middle of the dunes

Halfway down the east coast of Australia, there is a huge sand island that you should add to your list of places to see. Fraser Island, a UNESCO World Heritage Site, is a long dune island that stretches 120 kilometers and has over 100 freswater lakes surrounded by white sandy beach. Forget about swimming in the sea, strong currents and Tiger sharks surround the island. But, you can spot sharks from the several view points, one of the being the Indian Head.

You can access the island by a ferry from Hervey Bay. Since there are no paved roads, the island is strictly only for four-wheel drive vehicles. The main highway is the beach itself and the roads inland are sandy and narrow. Drive carefully and not too fast, since the beach is also used by pedestrians and aircrafts. If you are uncomfortable behind the wheel of a rented four-wheel drive, there is an opportunity to sign up for an organized tour with a driver and guide through a KILROY consultant. You can certainly take a day trip to Fraser Island, but if you choose to stay for several days, camping is a popular and inexpensive. However, there are also hotels and hostels available, but you should book in advance .

Dingos on the island

Be aware of the dingos. This wild population is decreasing, but they are still a safety threat that you should consider. It is illegal to feed or attract them in any way. If you encounter one, therefore, the locals say that it’s best to back up calmly. Be sure to move around in pairs or in a group. If travelling with children, keep the near you at all times.

The most famous of the dune lakes is Lake McKenzie, which is really worth seeing. Located in hiking distance from the beach, 100 meters above sea level, this clear blue lake surrounded by white dunes. The water itself is only 5 meters deep and you can swim in it. After a nice swim, stick around the enjoy the astonishing view until the sunset.

Fresh water flows from the dune lakes down to the ocean in Eli Creek. Put on your swimsuit and leave your belongings in the car. Hike uphill and, when you reach a good altitude, hop into the river and slide down. 80 million litres of water flow down this creek everyday, so it's like a natural water slide!

On the eastern side of the island, there is a shipwreck called the S.S Maheno. The ship began as a luxury passenger ship and then was used as a practice target for the Australian army during the Second World War. The wreck is massive, and it’s prohibited to climb on top of it.

Note! If you go to the island by yourself, please note that you need a permit for your vehichle and for camping. Permits can be bought in advance. For more information, be sure to consult the Queensland Backpacker Guide.

The open road is waiting!

Want to know more about the best way to see Fraser Island?

Whether you're planning a specific trip here or you're dreaming of a longer trip with Fraser Island as one of the stops on your itinerary, we can give you some helpful tips.